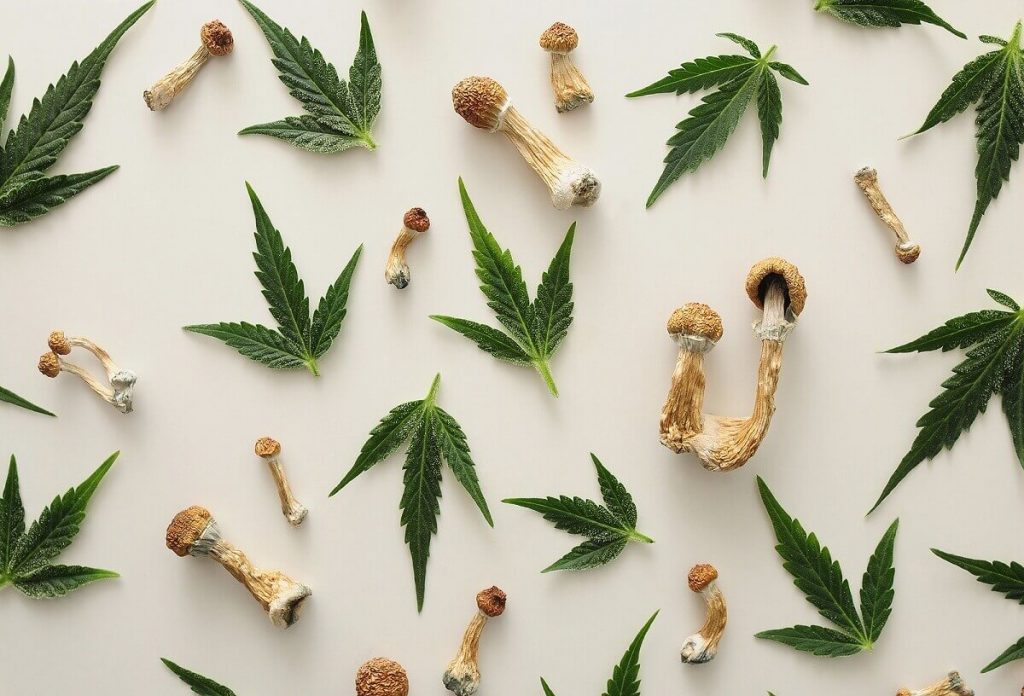 Weed and Mushrooms: Are They a Match?

Taking weed and mushrooms altogether may send a pair of waves that may go high or low. The entire effect can be flattened out. You may think that there’s a need for mixture specification when having these two mind-altering sources.
But it’s generally not recommended to mix drugs. Using polydrugs will result in bad trips, hospital confinement, and even death. Since both weed and mushrooms don’t contain synthetic components, are they a match that guarantees safety? You may be curious about how it will go. But first, you must understand the effect of the bud and the fungi.

Understanding How to be High With Cannabis

Different descriptions of high from Cannabis are stated by users. It may be confusing as it’s being described as stimulating, euphoric, relaxing, mellowing, and energizing. But you should know that there are hundreds of marijuana, so effects differ in so many ways. There are two main varieties, which are Sativa and Indica. Sativa is the one that supplies energy while Indica induces relaxation. Whichever you will have, it will improve your usual judgment like music sounds more appealing, and colors become brighter to your eye.

Your thoughts can be running like a strange train. You will have a lot of new ideas and insights while you become so funny. There’s a burst of energy, but you will end up succumbing to lethargy. You can be very happy without any reason and inhibition. Some strains can also make consumers sleepy, hungry, and sensual.

Magic mushrooms would give you a feeling of energy rush that penetrates through your chest and muscles. It gives clarity to your mind, and there’s a force that comes from the outside that embeds honesty. So you may find it difficult to lie to yourself and even to others. It will be easy for you to find a solution to your problems. There are different batches and doses in mushroom consumption. You should expect various visual effects and some kinds of experience. It’s hallucinogenic, but it doesn’t cause delusions as the users know that it’s a hallucination. They may see a tree that appears like a wizard. Things around them seem to move and talk. Some may lose sleep and appetite.

Similarities of Weed and Mushroom

There are some similarities between the two of them. They interfere with the normal flow of thought and perception. It seems that they can propel things like creativity, humor, joy, and appreciation of nature and beauty. Aside from the positive side, they both share the same negative aspect as they can both open the gates of the inner demon and negative emotions. They contain substances that make the consumers high. It’s THC from weed and psilocybin in mushrooms. They have a full entourage effect. Weed has cannabinoids and terpene while mushrooms have psilocin, psilocybin, and biocytin. Both of them are all natural.

The Two Sides of the Weed and Mushroom Combination

When you take weed and mushroom, the latter will take the limelight while weed becomes like a set decoration. Weed dampens the mushroom’s come-up, improves the peak, and prolongs the comedown. So there are two sides to the combination of these two just like other things.

A Sativa dominant strain can enhance the mushroom trip. You will be able to attain surreal hallucination, and great weirdness mingles with your mind. When the mushroom trip goes into an undesirable direction, weed will take the clutch to bring you into a comfy place and condition. It is likely to happen to regular weed users.
You may smoke weed at the end of the mushroom trip. It’s a way of bringing the magic back as the trip tends to be fading. So weed pumps more life to it. Weed can also be consumed at the beginning of the trip. The effect is on the calm side, and it wipes out inhibitions that are connected with the high.

The chemistry of weed and mushroom can be right or may go wrong. Some may find themselves facing their own demons and fear. It is where you think you messed up. You may be in a panic as you endure a troublesome trip. You may be able to manage it but the influence of weed can mess with it.
There’s no guarantee that weed can always make your high better. It can alter the clarity and wonder and it leaves you frustrated why you allow it to happen. Lethargy might also overcome you. You can have your magic mushroom all alone as you can’t expect what weed can bring when getting into the trip.
You don’t want to feel like you’re stuck in your thoughts. It’s going to be creepy.

Are Weed and Mushrooms a Good Match?

When used properly, weed and mushrooms can offer a whole new world of being high. It is advised to consume a low dose again and again. Then you always have the chance to have an increase later on.
You can choose strains like Stress Killer that have low THC content and lean more on the Sativa spectrum. Don’t forget to check the content of what you’re taking. Make sure you have a good combination as the weed can hasten the lagging movement of the mushroom’s effect.

Things can be at the right timing so you will have a more beautiful experience. But when you get unlucky, the combination of these two can let you move into a world of confusion and dark moments.
Before having these mind-altering substances, you better be familiar with them. You have to know how they work on your body by starting at a low dose. Having some ideas on something is also like preparation for its outcome. Test things out before you indulge.

When both weed and mushrooms are used properly, the wonderful world of being high that was promised to everyone can be achieved. But there are two sides to the coin, so undesirable effects can also be revealed. You must calculate your intake as well as your tolerance and experience to ensure that you only get the positive effects.