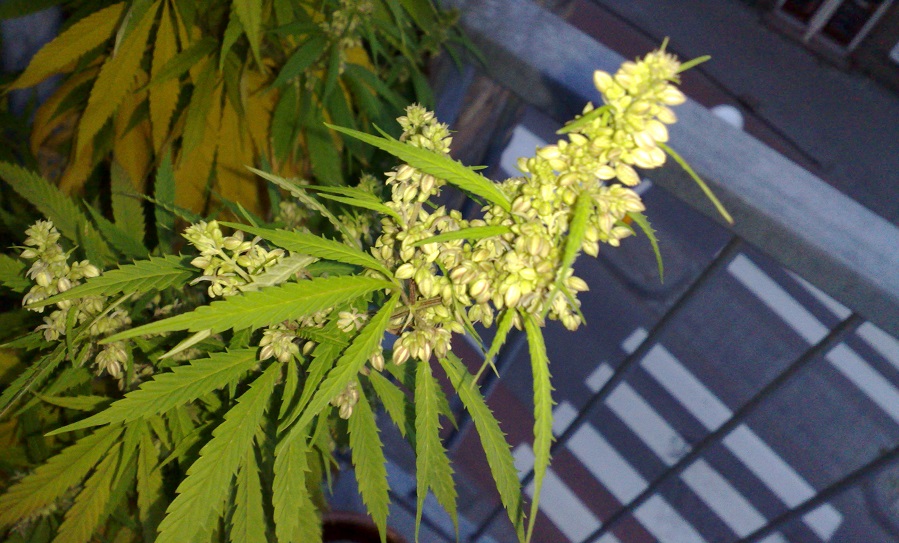 What to Do With Male Weed Plants

The male weed plants are mostly rejected and misunderstood. However, you have to know that they have their worth too. Before you dispose of the succeeding males the time they sex, perhaps it will be practical to consider their benefits and maximize them.

Many cultivators will classify and cut off visible male weed plants – which may seem acceptable and logical in a cannabis garden. However, before you immediately proceed to uproot the male plants the time their balls are displayed, you may find it interesting to know that there are few interesting things about what to do with male weed plants.

Although they are not as sticky as the female ones, fully developed male plants still bear a fascinating range of cannabinoids. Also, you can get plenty of pollen from the males if you allow them to grow fully. Males also flourish taller and faster and compared to females, they mature faster.

There is often a bright side on what may seem a bad situation. If you are unfortunate enough and learn that each of the seeds that you bought has gone male, then do not go ballistic. Handle them just like a cannabis crop and be fascinated at the volume of pollen you can accumulate. To answer – pollen can also make you stoned.

The fact is – male weed plants do not merit the inadequate portrayal they were given. They have some practical uses. Here are some of the common things that you can do with your male plants.

You Need Male Weed Plants When Breeding Your Strains

You require a male plant in breeding your strains. Cultivating cannabis can be so much fun. However, cultivating equal buds from clones might not be an interesting thing for the aficionados.

For seasoned cultivators, breeding new kinds of strains can become an exhilarating passion. Imagine formulating a unique bud that is stickier, more flavorful, better high, and produce higher yields. All these traits are possible if you amalgamate the best attributes of various strains with cautious breeding. Nevertheless, you can only do this if you have male plants.

When you begin breeding, the male shall take part 50 percent of the genetic component. It just becomes rational that you would want to choose the best male that you get as the donor.

How to Choose the Best Male Plant for Breeding?

Good-quality male plants are important for any cannabis breeding procedure. In giving pollen to females, the males are sharing 50 percent of the DNA that will constitute the following offspring. Hence, choosing males that exhibit beneficial features can create offspring that will keep those characteristics.

Some characteristics can be determined easily like the overall health, resistance to mold, pests, and hermaphroditism, and growth rate. Although traits that may have an impact on potency and flavor are less visible, seasoned breeders can identify different clever hints if the male is a potential father for breeding.

It is typically more difficult to determine the best male plant with the best aroma since we do not smoke the male plants. Commonly, breeders choose their males by conducting the elimination process.

Do not choose male plants that grow exceptionally tall or fast. Most often than not, they do not have the best quality of buds. Disqualify males that flower too soon, and dispose of those that autoflower. Weeds that flower at unanticipated moments may have a greater possibility of turning intersex.

Breeders choose the best males according to their stems. Huge and hollow stems are commonly good indicators. Seasoned growers explain that there is a progressive relationship between the THC level and the kind of stem.

Get rid of males with a delicate bud formation and retain those with compacted and firmly-packed buds to guarantee good yields. An easy sniff test is another way to determine a potential male. Choose the plants that emanate the best fragrance.

Males are also significant when breeding auto-flowering strains since their growth pattern characteristics can be inherited while the potency and flavor profile of the female is still kept – with a bit of determination and skill.

Different from other plants that can bear male and female flowers in one plant, cannabis is described as a dioecious plant which tells that the males and females flourish separately. The large majority of flowering plants are considered hermaphroditic, which means that every flower is composed of both male and female sexuality.

It is believed that dioecy huddles a fussy advantage in some plant populations because it magnifies the possibility of genetic recombination. In monoecious or hermaphrodite plants, cannabis of both genders is produced by a similar plant. If it self-pollinates, it will create an offspring whose DNA is the same as the parent. The insufficient variation may quickly direct to inbreeding and depleted genetic healthfulness in a population.

Always canceling the genetically specific males at the earliest period directs to weakened diversity. The existence of males is essential to the enduring toughness and exuberance of a strain. The shortfall of diversity directs to exhausted defenses and a heightened sensitivity to pests and diseases.

Vegetative cannabis, regardless of its gender, exhibits similar features when it comes to their health benefits. The entire acid profiles are similar and both genders are abundant in antioxidants and phenols. Juiced leaves are a popular tonic and the human creatures react well to raw and deep-green foods. Every part of the cannabis plant, except the thick stalks and heavy branches, can be juiced.

Cannabis juice is a useful origin of nutrients, which makes it progressively prominent among those who are mindful of their health. The male weed plants have similar cannabinoids as the females, although they come in lower amounts. This makes the male plants best for juicing. You can utilize them in the same manner as you will with females, except that you do not juice the bigger leaves and thicker stalks to go away from the bitter-tasting plant.

Cannabis juice serves as a great pot for providing the usefulness of cannabinoids such as CBD without the experience of high or other undesirable side-effects. If you like to come up with something simple, you may also make a delicious tea from the leaves of the male weed plants.

Dried pollen is ideal for cooking and can be weighed like flour – cooking its cannabinoid profits are directly into foodstuffs. Consider pollen similar to low potency kief, however, be cautious. It is very fine that a sternutation can certainly undulate a cartoonish cloud of dust in the entire kitchen. If you formulated extractions for your baking, simply apply more pollen oil to compensate for potency.

What to do with male weed plants? Do not speculate that male weed plants are empty of THC. Males are indeed far less compelling than females. Nevertheless, they still contain THC, and hence, can create psychedelic effects. Male weed plants do not bear buds, similar flower buds, anyway. However, there are cannabinoids in the flowers, stems, and leaves. You can also take advantage of the mild buzz by pressing and drying the pollen you see in a male plant.

By chance, male weed plants have a greater concentration of THC in the leaves compared to females during the vegetative period. The main concern with males is their bounded lifespan. Furthermore, there are no strategies available to prolong pollination and improve the production of resin.

Relying on the source of a specimen of hashish, it is conceivable that it has resin from male plants that were not taken out from the ground. Although many cultivators in conventional hash-making places like Lebanon and Morocco get rid of the male plants from the garden early to inhibit pollination, this isn’t the case every time. Sometimes males are harvested and processed together with the females.

There are unscientific reports of breeders and cultivators utilizing their male flowers, stems, and leaves to create hashish and concentrates, with different levels of success. As the general resin content is seemingly low, it is commonly ideal to utilize big numbers of plants or to employ methods that derive the highest from the plant.

It is also conceivable to utilize the male weed plants in making cannabutter and some other infusions and oils. Although there is limited concrete proof on the psychedelic effects of male plants as compared to the females, unscientific data show that the effect is relatively more ‘high’ rather than ‘stoned’.

Hungarian research in 1996 examined the specific features of the male and female plants. It was learned that male plant fibers varied from the female in different essential aspects. They varied greatly that conventional farmers were said to go extensive lengths to split the males from the females in the garden, as well as performing all levels of retting, skinning, spinning, and weaving processes independently.

Based on conventional understanding, male plant fibers are relatively finer and spongier compared to the female fibers. As an output, they were kept to create finer classes of cloth. Female fibers, on the other hand, are used to create rugged textiles like sackcloth and canvas.

These first-rate textiles created from male plant fibers were then employed to create a variation of household materials like towels, tablecloths, and bed linens.

When it comes to making hemp fiber, the better option is to use male weed plants. It is because of their rigid and stringy stalks. Males offer fine and soft fibers that proficient in weaving the most exquisite fabrics. Perhaps weaving is not your top hobby. Nonetheless, it is worth knowing that male weed plant fiber is the best consideration when it comes to creating hemp products.

Being an aide to humans, cannabis has numerous benefits – fuel, medicine, fiber, food, and more. Throughout time, cannabis has been employed as a repellent and pesticide in different ways. Its dried leaves and flowers were used to create repellent extracts and pesticides, and pure cannabinoids have been illustrated to wield anti-microbial and antibacterial effects. Besides this, cannabis can be employed as a companion plant.

Different studies were done over the past years attested to the capability of cannabis to inhibit undesirable pests. It has been cultivated next to cotton to inhibit cotton worms.  It inter-planted with potatoes to safeguard against potato blight fungus and potato beetle. It encloses vegetable fields to inhibit cabbage caterpillar, next to wheat to chase away root maggot, and as an overall repellent versus European chafer larvae.

It is believed that the terpenes released by cannabis that are hugely accountable for chasing away pests and insects, specifically pinene and limonene. Both the male and female weed plants release terpenes. Some cultivators will inter-plant the males in their vegetables rather than relegating them to the bin.

Many cannabis growers get rid of the male plants as a necessity. Female plants bear the buds that let us to either become high or benefit from the probable medicinal features of weed. Nonetheless, male weed plants are far from being futile. So, what to do with male weed plants?

Male weed plants are not worthy of the bad image. They have several good applications. However, the prosperities of keeping the male weed plants goes beyond these principles and ultimately serves a bigger aspiration.

Getting rid of the male plants offers great jeopardy to healthful diversity. Hence, the feasibility of cannabis in general. By keeping the male weed plants, you are dynamically assisting to reinforce the continued genetic endurance of cannabis. If you neglect the value of this for convenience, certain strains may simply perish.